Every year, just as the winter hunting season is getting underway, golden eagle hunters gather from all over Bayan-Ulgii province in western Mongolia to celebrate their fascinating tradition. Witness the art of hunting with eagles as the hunters test their skill with their eagles against all comers on the Golden Eagle Festival tour Mongolia!

This festival gathered more spectators and participants as the years’ pass. To not overcrowd at one festival, as well as celebrate their tradition with a more local setting the hunters and travelers now have three different festivals they can participate in.

The Golden Eagle Festival 2022 will be organized in three separate locations at three different times. Specifically:

For this specific tour, you will be a part of the October Golden Eagle Festival Mongolia 2022 with up to 100 Kazakh participants and their magnificent golden eagles.

During this 6-day 5-night Golden Eagle Festival tour you will witness tournaments that test not only the bird’s mettle and the hunter’s skill but also the bond between hunter and bird.

Hunting with eagles has been a traditional practice in Central Asia for thousands of years. However, this practice of hunting with an eagle is on the verge of extinction around the world. But in Kazakh culture in Mongolia, this tradition is still alive and well kept.

Behold the sight of majestic Kazakhs on horseback, dressed in their traditional dark coats and scarlet hats, with Golden Eagles hovering on their arms. You also get to enjoy the rare opportunity to view the Golden Eagles close up and can even have one to perch upon your arm. Also, enjoy Nomadic food culture in West Mongolia!

During this Golden Eagle Festival tour, there will be many opportunities to buy both Kazakh and Mongolian souvenirs, both at the festival area and Ulgii town. 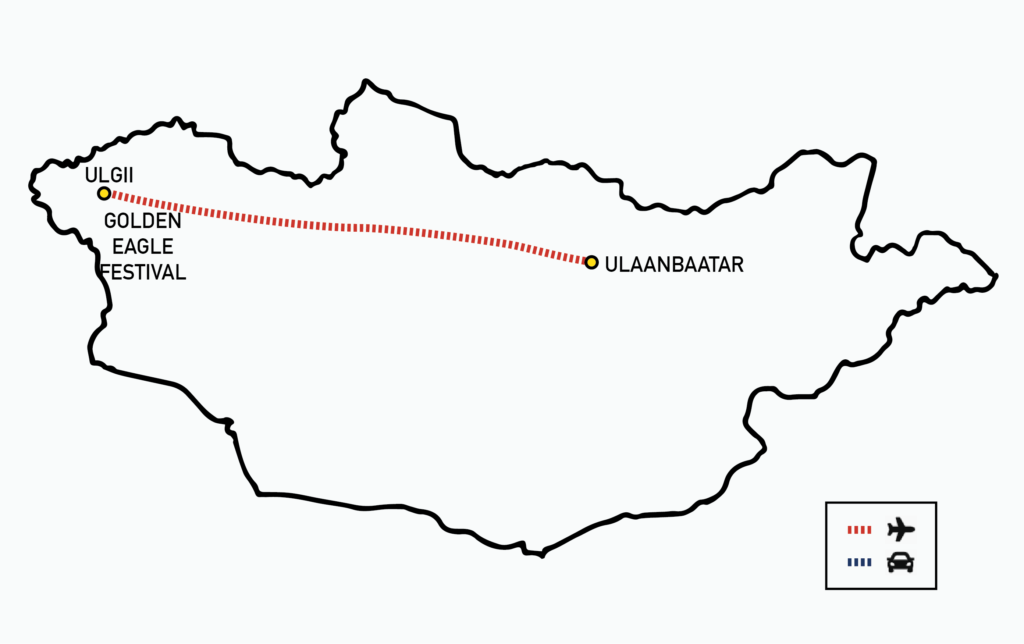 Experience the hospitality of a local nomad family

This day is our international arrival day. Depending on your arrival time we can visit the National history museum with priceless treasures of Mongolian history. We will also visit and explore the main square of Ulaanbaatar city called Sukhbaatar square located a short walking distance away from our hotel. An authentic folk concert is also available in the evening depending on your flight schedule.
Welcome dinner. 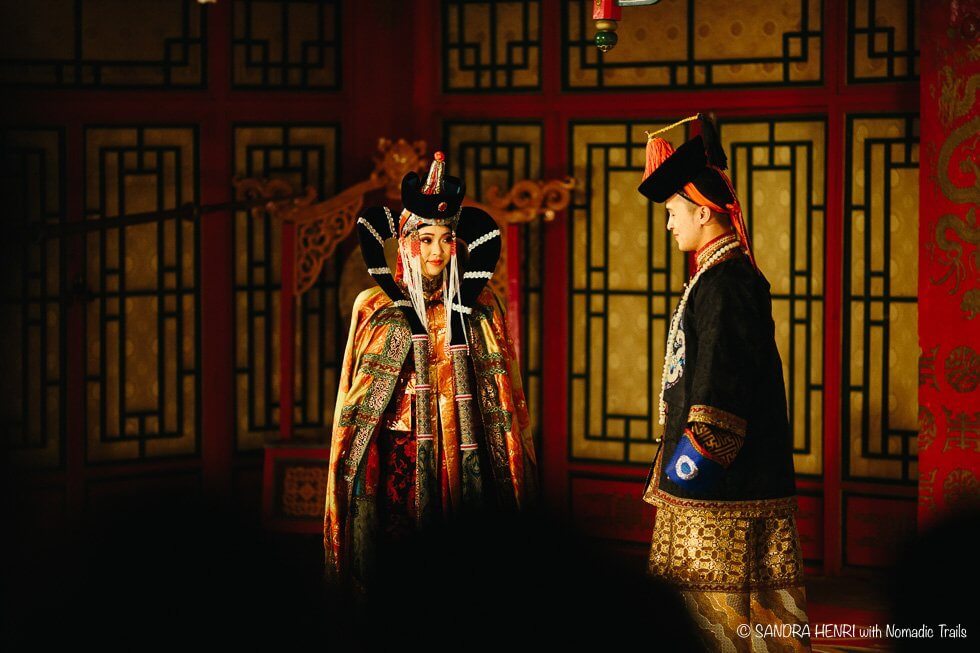 This day will start with a check-out from the hotel and a drive to the local airport for our local domestic flight.

Our flight destination is Bayan Ulgii, the westernmost province. After landing, we will have lunch at a local Turkish restaurant and try out the delectable local cuisine.

Arrival and transfer to a ger camp in the vicinity of Tolbo lake. Welcoming dinner with a local Eagle family. We will get to know their lifestyle and how they train their eagles. We will return to our ger camp for our Festival the next day. 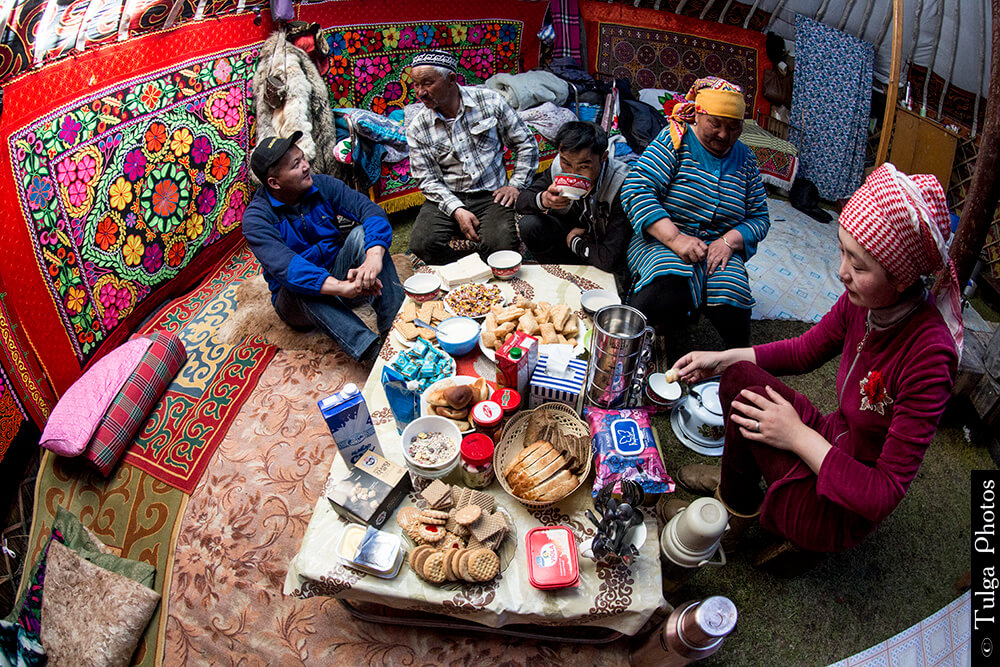 Day 3 of the Golden Eagle Festival tour starts with a hearty breakfast and a short drive to the festival site.

The festival starts with a parade where Eagle Hunters march proudly with their Eagles sitting proudly on their outstretched arm. Dressed in their traditional clothes, they make a truly amazing sight to behold.

We will spend the whole day at the Festival area bustling with activity. Lunch at the festival site.

There will be several competitions we get to enjoy this day. During these competitions, we get the amazing opportunity to see and capture on lens the skill of the Eagle hunter and their trusted eagle.

This beautiful morning, we visit the Festival area again as we still have half a festival to finish. This festival continues for 2 days. Lunch at the Festival site. We return to Ulgii town to visit the local open market. 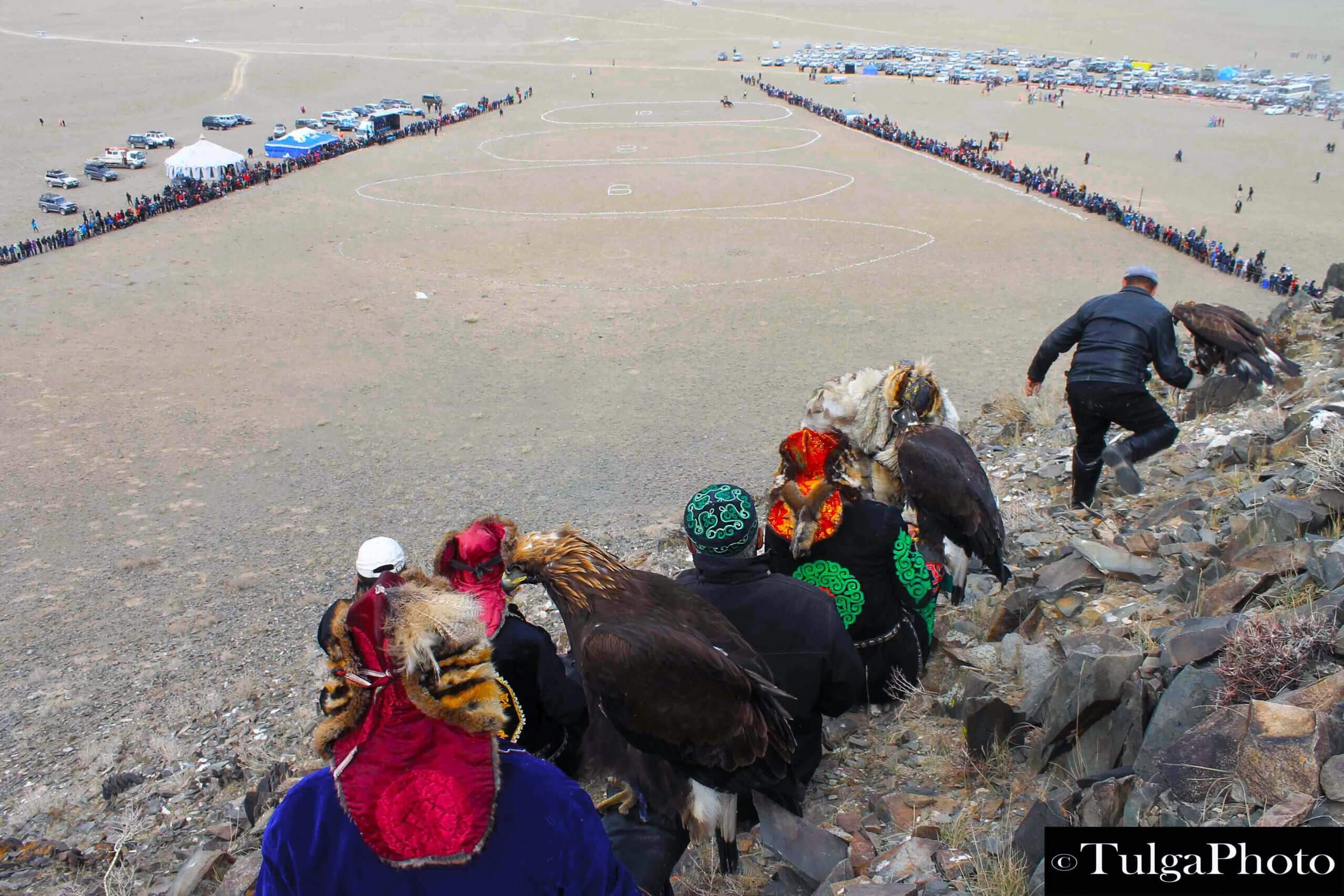 This day we take a local flight back to Ulaanbaatar city. Depending on our flight schedule, we will have a free evening with some souvenir shopping. Farewell dinner.

This day we transfer you to your international departure.

The baggage allowance for a domestic flight in Mongolia is 15kgs in total: 10kg for check-in luggage and 5kg for hand luggage. For extra luggage, you pay 3000-5000 Tugriks (local currency) per extra kilogram.

Charging your camera and equipment:

In Mongolia, electrical plug types vary. Most are Type C and Type E with 2 round holes. For this specific trip, you will be able to charge your phones in the car while we drive from one location to another or at a ger camp. For ger stays, you might not have many opportunities on charging your electronics, so please make sure to bring extra sets of batteries for your camera as well as power banks in your hand luggage.

For this specific tour - Golden Eagle Festival Tour, you do not need to bring a sleeping bag as you will spend three days in Ulgii town in a ger camp.

Eagle hunters and their eagles:

As we will be staying right near the festival site, many Eagle hunters can also visit us for dinner as well as take photos with you.

On each Nomadic Trails trip, we offer our clients the best experience possible. Our guides and Eagle Masters would give you instructions on how to hold an eagle properly.

Photo shooting after or before the festival is available. Normally it costs by hour or daily. It will be from 15 USD per hour to 40 USD per day per Eagle Hunter.

Western Mongolia has a wide range of handicrafts or souvenirs made by Mongolians and Kazakhs. There are local souvenir shops are available in Ulgii town. All these shop owners bring their goods to the Festival sites. So, you will have a variety of choices in the area.

Our wilderness camp was within walking distance of the festival grounds in an open valley near a small stream offering serenity with sweeping views of the valley. The Ger I stayed in was very nice and private.

Great cooking staff and food and the opportunity to meet tribal elders and be hosted and entertained by local and regional nomadic eagle hunters. Options for horseback riding and other private eagle hunter encounters.

If you are looking for a more intimate eagle festival experience, I highly recommend traveling with Nomadic Trails.

 5/5
Matthew K
Custom Reindeer & Golden Eagle Festival Tour
We travelled with a large group and everything from the second we landed was perfectly organized. We had the opportunity to see the beauty of Mongolia and interact with incredible locals

thanks to Nomadic Trails. Tulga and everyone on his team were so accommodating to any of our requests and even helped us navigate our way through the local market and barter for souvenirs. Truly delicious food as well at every stop. Phenomenal all around. Thank y’all for everything! Unbelievable experience in Mongolia!

 5/5
Patricia
Private Local Golden Eagle Festival Tour
Thanks to Tulga and his team we had a wonderful trip, met some amazing people along the way and saw the beauty of Mongolia in all of its glory.

Our entire trip was well organised and our needs catered for. I highly recommend Nomadic Trails to anyone who wishes to discover Mongolia.

 5/5
Rebecca
Custom Western Mongolia Tour
As a small group of 4 friends, we are very happy we hired Nomadic trails to guide us on our travels through Ulgii Provience in Western Mongolia. We spent a few days sigtseeing in both UB and Ulgii Cities and then rode horses

for 8 days through the steppe camping over night or staying with local families in their gers.
I was very impressed with the staff and the thought they put into our itinerary, and considerations for our comfort. They erected our tents for us each night so that we could relax after our days ride.

The food, even in the outback was good, the contacts that the team had with local people enriched our experiences, (especially when plans changed last minute due to unforeseen weather moving in across the mountains).

This was a most interesting trip and the knowledge of the staff made it even more enriching. I would like to return to other parts of Mongolia in future and would travel again with the team at Nomadic Trails, they are professional, fun, informative and friendly. Can highly recommend.

 5/5
Ricardo D
Photography Private Golden Eagle Festival Tour
I recently returned from a 2 week photography tour (thru IP Travel Photography) in Mongolia that was organised by Nomadic Trails. I was very impressed with the organisation

of our tour where on every occasion we had comfortable, modern and clean transport waiting for us wherever we went and never did we have to wait for our meals either.

As a vegetarian, my needs were completely met on every occasion with no fuss. All of our accommodation was also very comfortable, and whilst sleeping in gers, we even had staff members light our fireplace to ensure that we slept warm during each night. Not only was the service exceptional, but it was also incredibly friendly where we were always greeted with a smile and warmth. Our tour guide Tulga was very entertaining and extremely knowledgeable.

I would personally book a tour with Nomadic Trails again in a heartbeat!

Join us for your adventure of a lifetime and contact the Nomadic Trails travel experts!
Book this tour

Learn more about Mongolia from travel blogs written by Nomadic Trails Tour Leaders.
Take me there

This local Golden Eagle Festival in September 15-16, 2021 and 2022 is perfect for an up-close experience with both the locals and the tournaments.
Cultural Tour

WANT TO FIND OUT MORE?

Send us a quick email here: